Procedural generation has been around for many years, and its popularity has risen in the latest years with release of titles such as Spore, Minecraft, No Man's Sky, to name a few. In film/tv production, the Lord of The Rings films, 300 or Game of Thrones are known examples that use procedural techniques in their workflows.

The goal of Sceelix is to make such procedural generation technologies more mainstream and accessible to everyone.

One system to rule them all#

The specialization of the existing tools also means that one can't usually fully create a complete virtual world at once. Since these tools can only cooperate through export formats, there is always some manual labour involved to put them together in the end. Depending on the scale, this implies overheads and integration difficulties in the creation workflows.

By comparison, Sceelix does not focus on a single type of content type or structure. While Sceelix is still a work in progress in many areas, it can be used to produce terrains, vegetation, roads, cities, props, game objects and many more. This makes the content generation process much simpler, fluid, efficient and complete.

A system focused on the data#

At the core of Sceelix lies its node-base language to create connected graphs. Such visual languages have become popular in many systems, from geometry modeling (e.g. Houdini, Grasshopper) to shading tools (e.g. Amplify Shader Editor, NodeFlex) or even game engines (e.g. Unreal, Unity), among others.

The nature of Sceelix's node-base language is unique in the sense that it focuses on high-level operations (such as creation, loading, modification and export) that encapsulate a lot of complexity (such as best fit algorithms, constraint-based programming or growth simulations) that is more easily implemented using the underlying programming language, C#. Small mathematical expressions (such as adding, multiplying or using trigonometric functions) are performed on the node parameters themselves, instead of cluttering the graphs with small operations. Together with features such as encapsulation (the ability to reuse full graphs as nodes inside other graphs), this visual language gets easier to navigate, understand and manage.

A system for both design-time and run-time#

One of the appeals of procedural generation, particularly in games and simulations, is the ability to create new content on-the-fly. Either by occurring at load-time, before the level starts, or in run-time as the player moves around and takes different actions, it increases replayability since it offers dynamic experiences that differ from the limited set of those created and bundled in advance by the design team.

Many procedural tools focus on design-time generation of content to produce large, detailed environments, that are then shipped with the application. However, if the goal is to provide new content on-the-fly, these tools don't cut it - the generation process needs to occur dynamic within the application based on previously defined design rules. 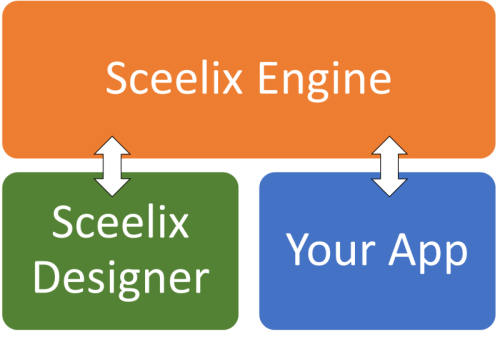 A system integrating the best of all worlds#

Sceelix provides means for loading and manipulating static assets at any point of the pipeline. This gives you the freedom to use procedural methods where it makes more sense for your project.

Almost everything in Sceelix has been developed with extensibility in mind, so that new features could be introduced without having the need to access and change the original source code.

Sceelix has been developed in C# using the .NET Framework/Mono and is organized into modules/assemblies that are dynamically loaded on startup. Anyone can develop new such modules and have them being loaded by just placing them in the plugins folder. Such modules can contain extensions to the Sceelix Engine or the Sceelix Designer, such as:

When procedural tools export their generated data to common formats (e.g. .fbx, .obj, .jpg, .svg), there is a lot of information that gets lost. In a game development scenario, for example, you might want to procedurally create a 3D model of a village featuring fences, doors, windows and lamp posts. At this point, once could also generate behavioral and semantic information, such as the wall collision information, door opening directions, light properties and ambient sound triggers. Unfortunately, no standard format exists to carry this data between systems.

Sceelix addresses this issue in the following ways: